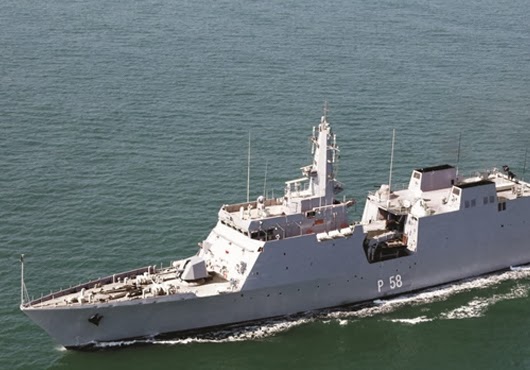 INS Sumedha, the largest offshore patrol ship indigenously designed and built by Goa Shipyard Ltd (GSL) for the Indian Navy, will be formally commissioned by VAdm Anil Chopra, PVSM, AVSM, FO C-IN-C East on 7th March 2014. The ship on commissioning will join Eastern Naval Command at Vizag and will give teeth to the Navy’s eastern command to bite the Dragon’s jugular – Malacca Straits.This state of the art ship will help meet the increasing requirement of the Indian Navy for undertaking ocean surveillance and surface warfare operations in order to prevent infiltration and transgression of maritime sovereignty. The first and second of the series – INS SARYU and SUNAYNA were earlier handed over to the Indian Navy by GSL on 21 December 2012 and 02 September 2013 respectively. More Ships of the same class are being constructed in Goa, India not far from the beach where Jason Bourne aka David Webb took a jog in The Bourne Supremacy and where Marie was shot at and killed while driving an SUV on the bridge.
at Thursday, March 06, 2014